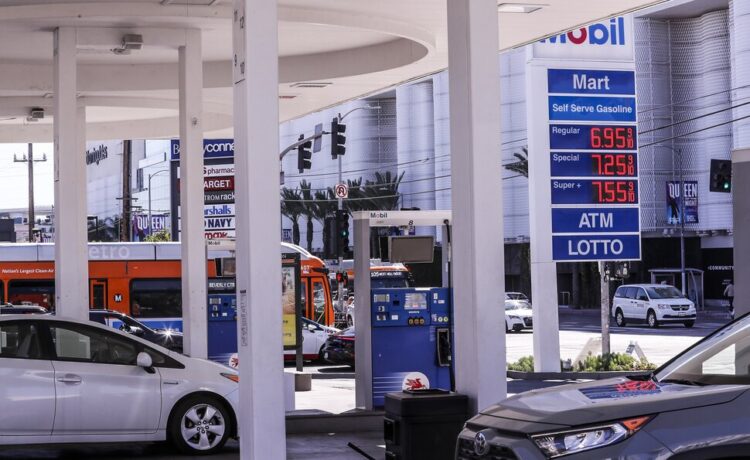 Prices were high before Russia’s invasion of Ukraine and will likely remain elevated – despite increased U.S. oil production.

No amount of whining about $4-plus gas prices can change the simple truth that the price of oil and gas is likely to remain high.

There’s one reason why: Current demand outstrips supply. Politicians, consumers, social media trolls all offer their analyses for why things have reached this point from the supposedly anti-energy policies of the Biden administration to the craven greed of oil companies.

But the price pressure was building once the immediate economic hit of the coronavirus subsided in 2020, and Vladimir Putin’s invasion of Ukraine two weeks ago was like throwing a lit match into a can of gas.

The U.S. ban on Russian oil imports announced Tuesday by President Joe Biden will only aggravate the situation in the short term, a point he noted in his comments from the White House.

“Defending freedom has a cost,” Biden said. That did not stop Republicans, who had clamored for the move, from blaming the high gas prices on Democrats.

But, politics aside, the U.S. is already the world’s No. 1 oil producer and currently exports oil to other countries. Prior to the pandemic, the U.S. had ramped up production to around 13 million barrels a day. Then the pandemic struck and production fell like a rock to below 10 million barrels a day as wells were shuttered and the industry saw bankruptcies and layoffs.

Like most businesses, the oil business was caught flat-footed when the economic recovery from the pandemic proved greater than anticipated and demand for oil began to return. Still, production increased quickly but also fell during spells in which coronavirus variants surfaced and economic activity took a hit. As of February, production has hit 11.6 million barrels a day – well below the peak in early 2020, though considerably higher than its pandemic-era lows.

But Americans had been busy during the intervening months, embarking on a massive spending spree, flush with cash from being locked down during the pandemic and massive amounts of stimulus from the federal government. They bought bigger homes, gas-guzzling vehicles, boats and began taking to the roads en masse still fearful of flying.

While supplies of overall oil and related products rose 12.3% from the same period last year during the past week, inventories remain about 13% below their five-year average for this time of year, according to the Energy Information Administration. Crude oil imports are currently running about 10% above last year at this time.

Yet the financial crisis that hit the industry during the pandemic chastened producers. They revamped their businesses away from the debt-fueled expansion of the past, using the recovery in profits to reward shareholders and please Wall Street. Strict production levels were imposed and financial discipline became the watchword. Even as recently as before the invasion of Ukraine, companies were touting that returns to shareholders and committing to production increases on the order of 5% a year.

“We have learned our lesson,” Devon Energy CEO Rick Muncrief said in an interview with the Financial Times in mid-February. Devon is a darling of Wall Street. Its stock has risen from $16 a share to trading at around $60 now.

Now, with oil trading recently above $125 a barrel, the question is whether domestic producers will increase their production more than planned and just how fast they can do it, given that in good times it might take a month or so to bring new oil to market. And these are not normal times, given supply chain disruptions, worker shortages and many unknowns about the international oil markets.

“I think a major ramp-up is coming, it’s inevitable with prices at this level,” says Ben Cahill, senior fellow in the Energy Security and Climate Change Program at the Center for Strategic and International Studies.

“My sense is if you throw enough money at a problem something will happen, but it will take months,” Cahill adds.

Alex Andlauer, an industry analyst at Kpler, wrote on Tuesday that “the process of adding new barrels to the market can take up to three months for uncompleted wells,” those that have been drilled but are not currently producing.

“The number of uncompleted wells is currently around 4,400 – that’s nearly half compared to the high of summer 2020 according to (the Energy Information Administration), but still enough to start new production,” Andlauer added.

One of the biggest constraints to bringing new production online is the cost and, in some cases the absence, of key materials such as sand, which is used in fracking.

Still, oil is a global commodity and there are other sources of oil that could be brought to market. The obvious answer is increasing production in other countries. The U.S. appears to have reached out to Venezuela, which is under international sanctions, and there have been some rumblings of interest on the part of key producers such as the United Arab Emirates.

Sonya Savage, the energy minister for the Canadian province of Alberta, was quoted as saying at a recent industry conference in Houston that Alberta has spare pipeline and rail capacity that could move more oil to the United States.

Oil prices did fall sharply on Wednesday, with international benchmark Brent crude tumbling 13% as markets further digested Biden’s Tuesday ban on Russian oil imports. Traders said markets were coming to the conclusion that the damage may not be as severe as first thought.

The wild card is and will be the actions of Putin. And that is hard to predict, says Agathe Demarais, global forecasting director of the Economist Intelligence Unit and an expert on Russia. The EIU is already forecasting the war in Ukraine will cost the global economy $400 billion this year, knocking growth down from 3.9% to 3.4%.

“The reality is we don’t know and don’t have a clue,” what Putin is thinking, Demarais says. But she notes the sanctions the U.S. and its allies have imposed, including restrictions on the country’s central bank and blocks on the foreign reserves held outside Russia are likely to cause major economic damage.

“It’s about half of its foreign bank reserves,” or about $300 billion or so, she says. “That will have a massive impact.”

“Oil prices are going to remain quite high as long as the conflict remains in Ukraine,” Demarais says, adding that the conflict could continue “several months, perhaps even years.”